And I thought she was showing off! 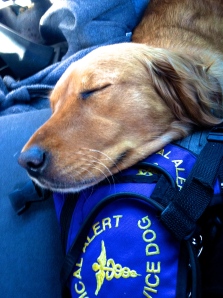 It’s been a hard day
(actually, it’s been many hard weeks)!

This is the sort of picture I would usually get of Rainie after an event such as a diabetic walk, or tonight’s EAC Crab Feed, or any time there are many people with diabetes in one area — as a diabetic alert dog, she is always aware of everyone’s blood sugar.

However, I took this photo yesterday after I dumped jackets, etc., on the floor before bringing in the groceries from the car.  Rainie was exhausted.  We had just come back from a very crowded grocery shopping (she gets very nervous when there are many shopping carts being pushed around, and her “I’m nervous” behavior includes nudging, which is also one of her ‘alerts’), and my blood sugar has been in what I like to call “super-ball” mode for the past few weeks.  Rainie has been very busy alerting on all the highs and lows.  I didn’t realize that she was also doing this while dodging the other shoppers.  Fortunately for me, she rarely gives up.

I had run into some friends in front of the egg section.  (I hadn’t seen them in a long time and joked about their recognizing me because of Rainie).  Well, as we talked, Rainie begin nudging me.  I petted her, knowing that my bs (blood sugar) was fine, having just done it in the car.  As I acknowledged her, Rainie looked at my friends for what I assumed was attention.  She does this sometimes because she is a true flirt!  After a few minutes of “annoying me” my friend suggested I might want to take something; so I popped a glucose tablet in my mouth – despite the fact that I knew I was ‘fine’.  I wanted to keep talking.  When we finally said good-bye and I was in line at the cashier, I did my bs.  It was unchanged from what it had been in the car.  “Show-off!” I thought!  I was annoyed.  But Rainie would  not stop alerting, in fact, she was ramping-up.  So when I got to the car I did my bs again and found it had dropped 50 points between then and the check-out line!  Good girl, Rainie!  I ate more glucose while sitting in the car; and while waiting for my bs to rise I rediscovered that my CD player was still out of discs and that I still wish they would make chocolate or peanut-butter flavored glucose.   Sigh.  It took 20 minutes and many glucose tablets before I was safe to drive.

Thank you, Rainie (and Jan and Chris)!

Given as a gift

What else can a diabetic alert dog do? (As well as an introduction)